Priests in the Attic

The Official Blog for Elaine A. Small

EMC Lifestyles – Quinte West – When Elaine Small was just a girl growing up in Winnipeg, she thought nothing of having 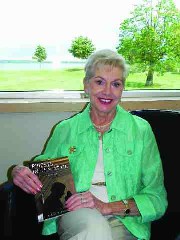 several priests living upstairs. Her father was a minister and there was no seminary so the young men boarded with the family.

“I thought everyone had priests in the attic,” she says smiling.

Five years ago, she decided to make that the name of her book, a memoir of her life.

“It’s a metaphor,” she says. “A spiritual thread runs through my head.”

Elaine adds that the power of writing her life story was a healing process. Through a technique called reverie, she recalls not just facts but feelings associated with events. Memories triggered by the five senses bring back deep feelings and allow her to experience the emotional truth.

“It’s an amazing experience,” she said.

Elaine says by writing about personal events we can re-create them in our mind. We can correct the attitude and see it differently.

“We can re-right the story,” she says.

She adds that no one remembers a situation the same way. Each person has her own individual point of view.

For example, she recalls feeling terribly guilty over something that happened with her sister when she was young. But her sister has a totally different take on the same event.

“In retrospect, we are able to address events with humour,” Elaine said.

Elaine has changed the names of many of the people in her memoirs, but says the facts are true. She tells about her exciting life singing in nightclubs in Toronto in the 1960s, yet seeking somehow to regain her faith despite tumultuous times. The book is well-written and engages the reader in every page. Elaine studied writing for two years at Humber College taking correspondence and summer classes. Her book was published last October and she has already acquired a list of fans, including some from Wellington where she had a bed and breakfast for 15 years. She now lives in Belleville with her husband Richard.

Elaine will be reading excerpts and talking about the process of writing through reverie at a special event at the Quinte West Public Library on Saturday, June 25, at 2 p.m. in the multi-purpose room. She will also be signing copies of her book.

Priests in the Attic is also available at local bookstores, Greenley’s and Chapters in Belleville, as well as online at amazon.com . Elaine is offering ten per cent of the profits of her book to the Alzheimer Society.